2021 has been an unusual year in many respects and class actions have not been immune from both the pressures and distractions of COVID-19, and other challenges not linked to the pandemic. With nine months of the year behind us, a reasonably clear picture of class action activity is starting to take shape.

As many of our clients are curious about how these issues are affecting class action risk, we are releasing this interim update to provide a high-level snapshot of trends and developments so far this year.

Our annual Class Action Risk publication will be released early in the new year to provide a holistic assessment of the impact of those trends and developments on class action risk.

In recent years, we have reported a clear trend of increasing filings – with a sustained material uptick since 2017. This trend does not, however, appear to have continued into 2021. Based on an extrapolation of filings data to 30 September, it looks like filings in 2021 will come in at around 2014-2016 levels.

It remains to be seen whether this is indicative of a broader trend, or an anomaly caused by the uncertainties associated with the funding landscape (discussed below) and the impact of COVID-19 on business more generally. We are certainly not prepared to call a downturn in class action activity at this stage.

The trends in respect of the number of competing class actions are largely on par with the last two years and are therefore not the driving factor for the downturn in claims. 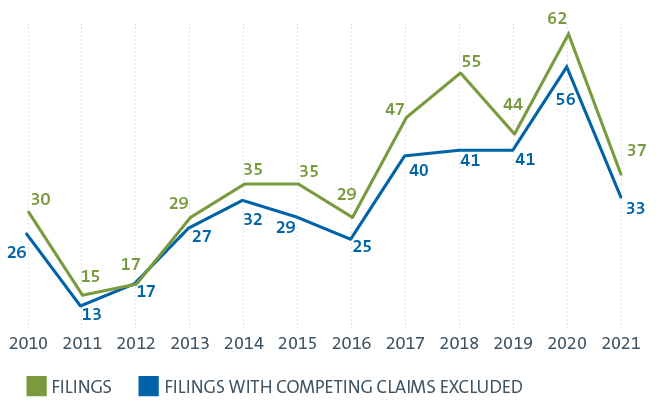 2021 data is an annualised projection based on actual filings to 30 September.

Consumer claims dominate, but also a broad base of other claims

The recent trend of consumer claims dominating the landscape has continued into 2021. The new consumer filings include claims in relation to medical devices, superannuation fees, insurance policies, electricity prices and freight services.

The emerging trend in respect of employment-related claims has also continued. The claims filed in 2021 so far have related to alleged underpayment of wages in the government, healthcare, mining and industrials sectors.

There has also been a broadening base of other types of claims including in respect of franchisees, treatment of indigenous persons, environmental contamination, bushfires, resumption of land and outbreaks of COVID-19.

Shareholder claims, once the most common form of class action, have fallen to their lowest levels in over a decade. While this might be attributed to the change in the law in relation to when damages can be claimed for continuous disclosure breaches (see below), our sense is that it is more likely to be the result of the pressures and uncertainties in the funding environment (see also below) – in that respect, we note that shareholder class actions are the type of claim most likely to be third-party funded. 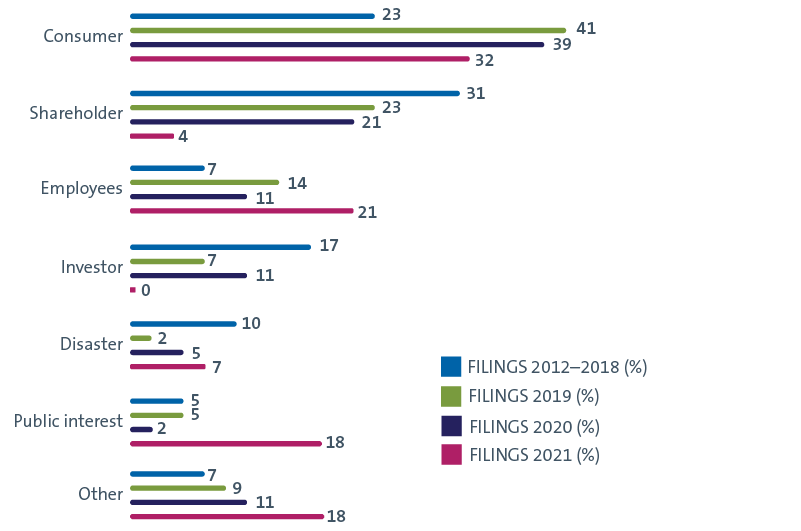 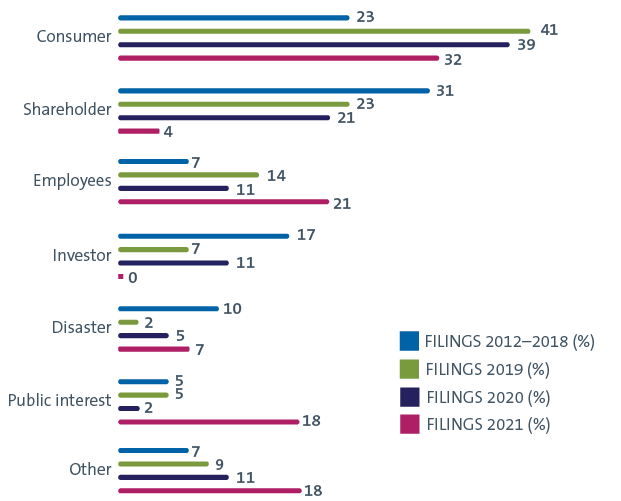 The banking and financial services sector has long been the biggest target for class action filings. This year it is, however, the government sector that has faced the most claims – this has included claims in respect of the treatment of indigenous persons, environmental contamination and damage, underpayment of federal employees, prisoner safety, and COVID-19 lockdowns.

The healthcare sector has also faced a significant increase in claims this year. These claims all relate to one type of medical device (pelvic mesh) and the underpayment of junior doctors. Given the concentration in these two types of claims, this may be a momentary uptick for this sector rather than indicative of a sustained increase in class action risk.

The banking & financial services sector comes in third with a marked reduction in claims filed compared to previous years. This is perhaps an indication that class actions arising from issues exposed in the Royal Commission are beginning to tail off. However, even if that is the case, we think it is too soon to make any predictions in respect of a material decline in class action risk for this sector. 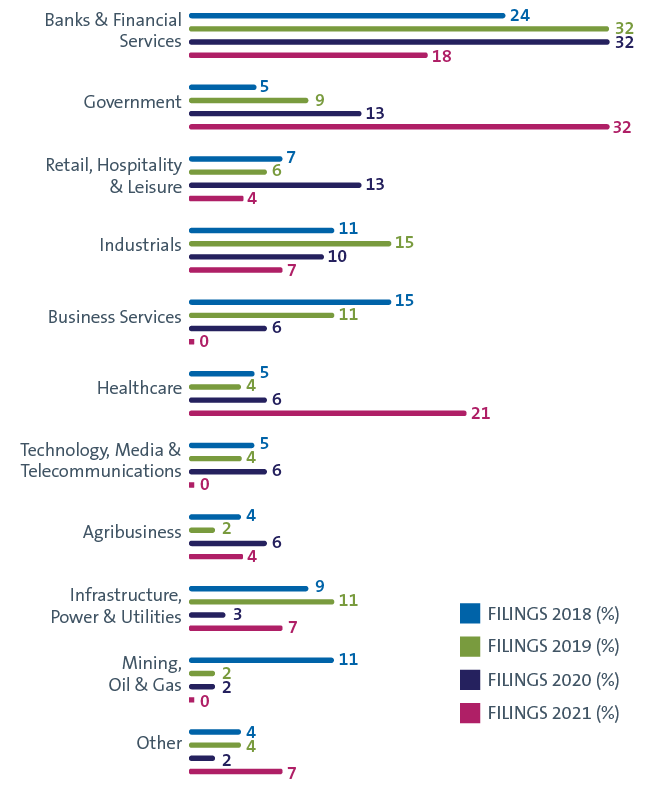 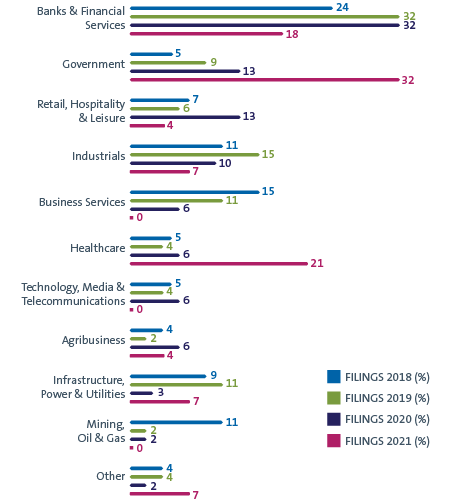 2021 has been another uncertain year for litigation funders, with the trend of a reduced number of new filings being third-party funded continuing from 2020.

This is likely to be the result of a combination of pressures on funders. As discussed below, these include: 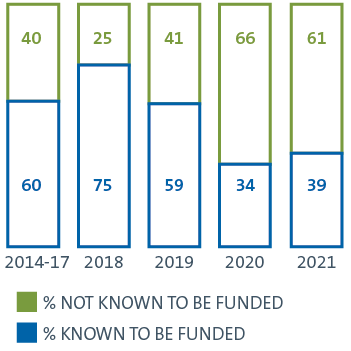 Where are class actions being filed? 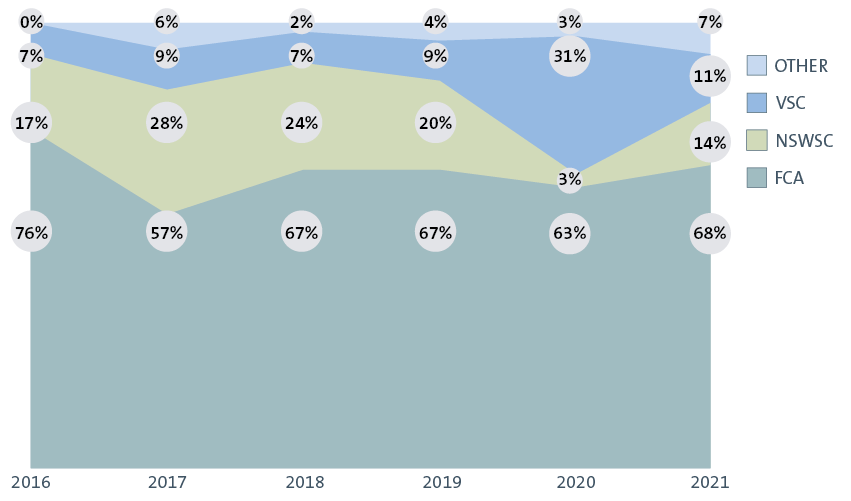 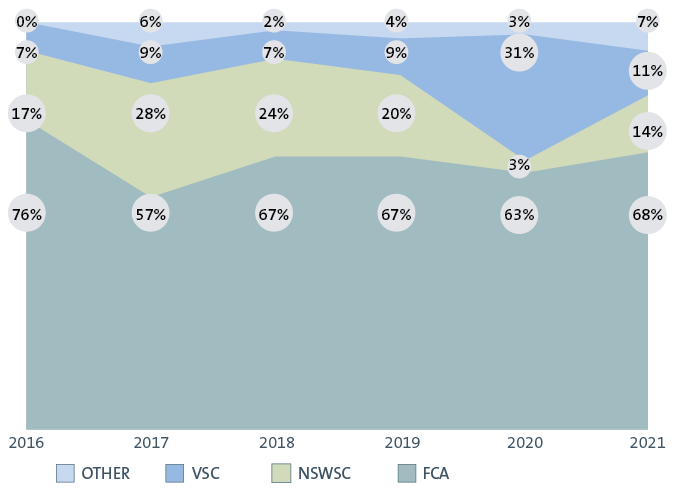 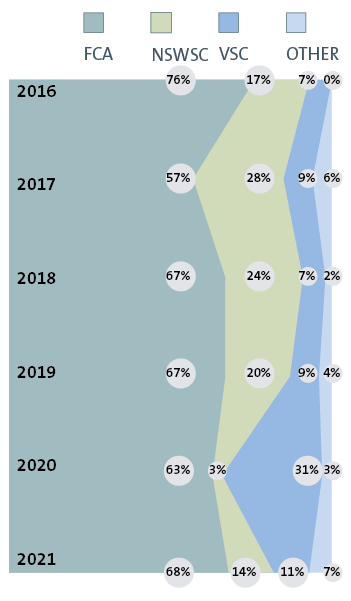 Unsurprisingly, there have been a number of class actions directly arising from the pandemic. These include:

This follows six COVID-19-related class actions filed last year – five in Victoria in respect of outbreaks from hotel quarantine and in aged care facilities; and one in NSW in respect of the Ruby Princess cruise ship outbreak.

Key developments in 2021 so far

In March 2021, the High Court provided much-needed clarity on competing class actions in its decision in relation to the way the Supreme Court of NSW had dealt with the five competing shareholder class actions against AMP. A majority of the court held that:

Although the majority rejected the first-in-time rule or presumption, the fact that the order of filing remains a relevant consideration for the multi-factorial analysis means that, if competing class actions are under consideration by plaintiff firms and funders, defendants are likely to face multiple claims filed in short succession.

An uncertain (and complicated) time for litigation funders

Funders, the courts and ASIC are all still coming to grips with the requirements introduced in August 2020 for funders to comply with the requirements in the Corporations Act for managed investment schemes, including to hold a financial services licence and to issue a Product Disclosure Statement for the funding scheme (see Class Action Risk 2021 for more details).

ASIC has issued various forms of transitional relief while a range of issues are resolved and, in July 2021, issued a consultation paper in which it sought feedback on its proposed guidance for litigation funding schemes. One of the issues still to be grappled with in this context is whether the forms of funding backed by law firms (including 'no win, no fee' and contingency arrangements) may also be subject to the scheme requirements.

On a different note, on 30 September 2021, Treasury issued an exposure draft for a bill that focuses on the scope and content of litigation funders' contractual arrangements with class members. Among other things, it proposes the introduction of a 'fair and reasonable test' in respect of funders' remuneration which involves a rebuttable presumption that the remuneration is not fair and reasonable if less than 70% of the gross proceeds from a settlement or judgment are to be paid to class members. Under the proposed bill, there are a number of factors a court must consider when assessing whether a proposed distribution is fair and reasonable, including:

If the proposed legislation is passed into law, it will only apply to proceedings filed after enactment.

Contingency fees – failure at the first hurdle, but not the end of the race

Much was made last year of Victoria's removal of the prohibition on lawyers charging contingency fees in class action proceedings in the Victorian Supreme Court. This change opened the possibility for plaintiff firms to recover a percentage of a successful class action claim via a 'group cost order' (GCO) and, as noted above, was the likely driver of a material increase of filings in the Victorian Supreme Court last year.

The first decision in relation to an application for a GCO was decided in September 2021 in class actions relating to 'flex commission' arrangements in respect of car loans. The court held that its discretion to make a GCO involves a 'broad, evaluative assessment of the relevant facts and the evidence' in which the interests of class members must be given primacy. The cost of funding to class members is a significant consideration, but not the only one. Other considerations may include the significance of members obtaining an indemnity against adverse costs, the requirement to give security for costs and general considerations of reasonableness and proportionality.

The court declined to make an order in the cases before it because the plaintiffs had existing, stable funding arrangements covering the risks they assumed as representatives, and the court was not persuaded that class members would be better off if GCOs were made.

While clearly a blow for the firms involved in the flex commission cases and potentially for other existing claims in which a GCO may have been sought, we do not think the court's reasons introduce an insurmountable obstacle for firms seeking GCOs in the future. We expect that future arrangements will be structured in a way that will avoid the pitfalls encountered by these first applications, just as we have seen in respect of so many other aspects of class action litigation over the last twenty years.

Following a period of temporary reform, the continuous disclosure regime was permanently amended in August 2021 in an effort to combat opportunistic shareholder class actions and the associated impact on premiums for directors and officers insurance.

The reform represents a restoration of the original fault elements that were present at the time the continuous disclosure regime first came into operation. Under the new laws:

In Class Action Risk 2021, we noted the increasingly relevant new frontier of class action claims against companies and government relating to the non-disclosure and management of climate change risks.

Of particular note since then is the decision in May 2021 in a class action which seeks an injunction to stop the Minister for the Environment from approving Whitehaven Coal's Vickery Extension Project. The Federal Court held that the Minister owed a duty of care to children facing a 'real' risk of death or personal injury from global warming. The court did not order an injunction against the Minister's approval of the proposal as they had not yet decided whether to give approval, and any breach of duty would need to be founded on the reasons for giving (or not giving) approval. An appeal has been filed in respect of the existence of the duty of care.

Also making its way through the court is a class action against the Federal Government (and two of its officers) on behalf of retail investors and holders of Australian Government Bonds, for an alleged failure to disclose climate change-related risks in term sheets and information memoranda issued by the Government in relation to the bonds. The Government's attempt to have the claim struck out was rejected in October 2021. The action is the first of its kind and, notwithstanding the difficulties in successfully pursuing such a claim (particularly one sounding in damages), it is likely to be seen as a bridge to more commercially focused climate change class actions against corporations.

Belinda is a Partner in Disputes & Investigations with extensive experience advising on a range of complex commercial disputes.
View profile

Jenny is a Partner specialising in commercial disputes (with a particular focus on class actions and financial services litigation) and investigations.
View profile

Alex is a Partner and a commercial litigator, specialising in the defence of class action litigation.
View profile

Guy is a Partner and an experienced litigator with substantial experience leading teams in major litigation and public inquiries.
View profile

Michael is a Partner who specialises in commercial and construction litigation, arbitration, and insolvency and restructuring.
View profile

Jaime has a wide-ranging contentious practice including litigation in the Supreme, Federal and High Courts and acting in arbitrations, mediations and regulatory
View profile

Paul is a Partner and Sector Leader of Industrials, and specialises in major commercial litigation and dispute resolution.
View profile