Although Trident Foods was unable to demonstrate use of its TRIDENT trade marks during the relevant period, for lack of actual control over its parent company, Justice Gleeson considered that the residual reputation in the marks meant that it was in the public interest to keep them on the Register. Trade Marks Attorney Jules Thai and Trainee Trade Marks Attorney Thomas Campbell report.

This is the third decision in an ongoing trade mark feud between Trident Seafoods Corporation (TSC) and Trident Foods Pty Ltd (Trident Foods) over the right to use the word mark TRIDENT for seafood products. A timeline of developments is provided below. 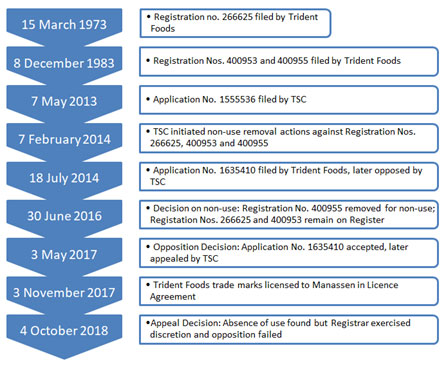 TRIDENT-branded products have been sold by Trident Foods' parent company, Manassen (but not Trident Foods), since 2000. However, it wasn't until 2017 (after the Registrar's first decision and the relevant period) that Manassen was authorised by a formal licence agreement to use the trade marks. This licence was not retrospective, and the evidence was insufficient to demonstrate that Trident Foods had exercised quality control or financial control over Manassen during the relevant period. Therefore, Justice Gleeson held that there had been no actual control or use, within the meaning of section 8, by the registered owner during the relevant period. Instead, Her Honour exercised the discretion under s101(3) to keep the two Trident Foods registrations on the Register.

Section 101(3) of the Trade Marks Act 1995 (Cth) provides that the Registrar or court may decide that a trade mark should not be removed from the Register even if non-use has been established. In exercising the discretion, Justice Gleeson highlighted the following relevant considerations.

This decision illustrates that a successful application for removal for non-use is no certainty – even if the appropriate grounds are established. Her Honour's considerations of public policy and the parties' conduct after the relevant non-use period are worth bearing in mind when considering the prospects of a non-use removal application.