Is URBAN ALE a distinctive trade mark? Would you consider the words URBAN PALE (displayed prominently on your stubby) to merely describe the type of beer? Are inner-city breweries 'cool', 'trendy' and 'fashionable'?

These important questions were considered in Urban Alley's failed Federal Court appeal against a decision cancelling its trade mark registration, highlighting the risk of adopting and attempting to enforce a mark that is not inherently distinctive.

Battle of the Urban breweries continues

As we reported in April, Urban Alley Brewery's attempt to sue fellow beer producer La Sirène for infringement of its URBAN ALE trade mark backfired before Justice O'Bryan in the Federal Court. At trial, La Sirène successfully sought cancellation of Urban Alley's URBAN ALE registration by way of cross-claim, on the grounds that Urban Alley's mark:

At trial, Justice O'Bryan also found that La Sirène's use of the words 'Urban Pale' on its product packaging, shown below, was not use as a trade mark, and so, in any event, infringement was not established. 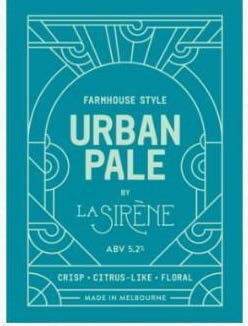 On appeal, Urban Alley challenged the cancellation of its registration and the trial judge's finding that the URBAN ALE trade mark is not capable of distinguishing its beer from that of other traders.

The Full Court rejected Urban Alley's arguments and sided with the trial judge, finding that the words URBAN ALE describe craft beer made in an inner-city location – a tangible, descriptive meaning, neither allusive nor metaphorical. The court considered the mark to be a laudatory epithet – not inherently adapted to distinguish Urban Alley's beer within that segment of the market.

The court held that a descriptive trade mark may reference a broad range of characteristics, including attributes such as beer brewed in an inner-city location. In these circumstances, the meaning goes beyond traditional product traits such as the flavour or style of beer, but is descriptive nonetheless.

Beware of prior marks

The court considered the secondary basis for cancellation – that URBAN ALE was deceptively similar to, and thus blocked by, the earlier trade mark URBAN BREWING COMPANY.

The court rejected Urban Alley's argument that its mark is not deceptively similar to the earlier mark because the words 'Brewing Company' and 'Ale' convey different things. The court held that there is a close association between those words and, coupled with the shared first element 'Urban', the marks are deceptively similar when considered as a whole. The Full Court therefore upheld both bases for cancelling the URBAN ALE registration.

URBAN PALE not used as a trade mark

As cancellation of the URBAN ALE registration was upheld, the infringement case against La Sirène was no longer a live issue. However, the court's discussion of trade mark use provides a timely reminder of implications of using trade marks in a descriptive way.

The court upheld the finding that La Sirène had not used the words URBAN PALE as a trade mark.

This may be surprising to some in the context of the isolated product packaging as shown above: the words URBAN PALE are prominently located in the centre of the La Sirène label with emboldened font and large lettering. However, the court stated that the prominence of those words does not convert an 'essentially descriptive name' into a trade mark indicating the source of origin.

This view is less surprising in the context of the broader La Sirène product range, with the use of URBAN PALE as a descriptor consistent with the brewery's other products, as shown below: