With the world's first hydrogen cargo being shipped from Victoria in January 2022, production of hydrogen at scale in Australia seems closer than ever. However, developing a successful hydrogen industry requires appropriate policies, regulations, and incentives at both national and state levels. All Australian state and territory governments, as well as the federal government, have now released strategies for the development of a hydrogen industry – and many are providing significant financial incentives to kick-start it.

However, with more than a dozen different hydrogen policy statements and strategies now in force, it can be challenging for stakeholders and industry participants to work out what it all means, let alone identify the best policy settings for their projects. There is clear frustration at the lack of coordination by states and territories, particularly when a nationally consistent regulatory framework is a goal of the National Hydrogen Strategy (National Strategy).

In this Insight, we compare and contrast the different approaches taken in each jurisdiction around Australia.

All entities considering developing or investing in hydrogen projects in Australia should be aware of the differences in the policies adopted by the Australian and state and territory governments and understand the implications for their projects. 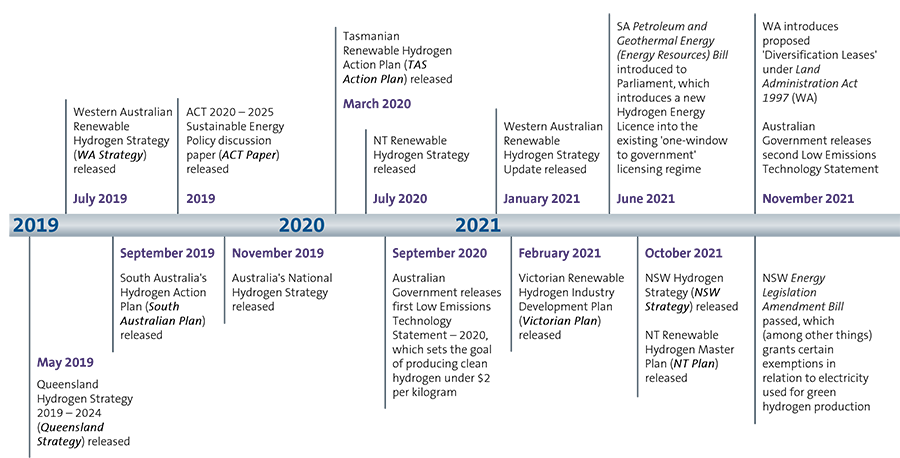 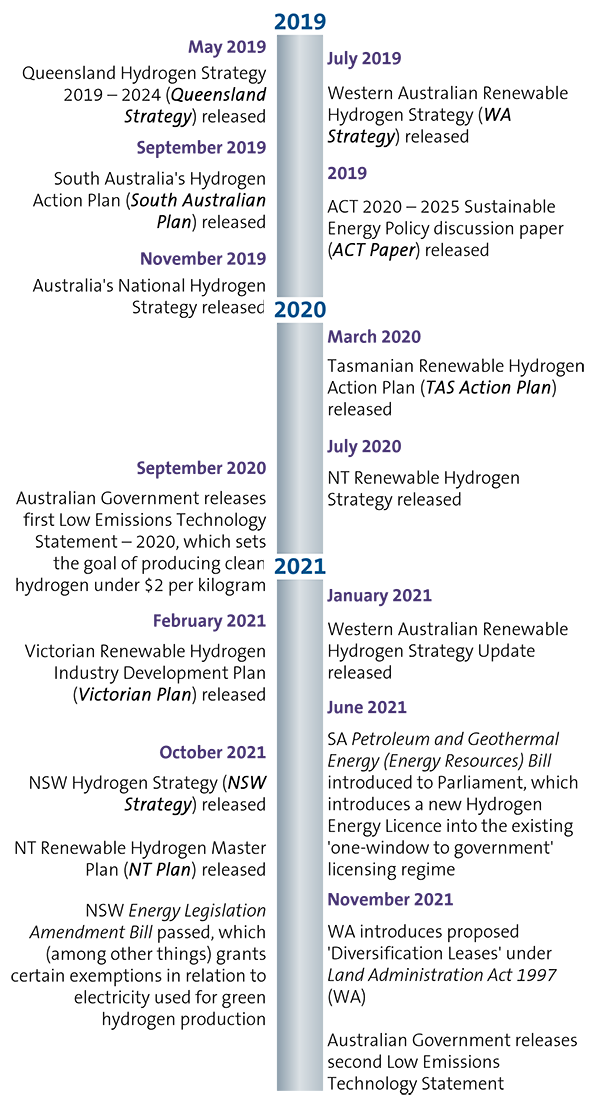 In line with the National Strategy, most state and territory hydrogen strategies include a vision for the development of a hydrogen industry (or its use as an energy source) out to 2030. However, the approach to setting shorter-term targets varies:

The varying time horizons for these strategies makes it difficult for investors and industry participants to track the progress of each state and territory in establishing a hydrogen industry. Jurisdictions with firm, quantitative targets over the short-to-medium term may prove favourable, as their targets are more likely to drive tangible action and provide interim opportunities for the relevant government to demonstrate its commitment to hydrogen. However, the nature of the targets (as set out in the following section) and the steps taken by the government to meet the targets will also play a significant role in building investor confidence.

We are only recently seeing the inclusion of specific targets in state and territory hydrogen plans and strategies. Due to the nascent status of the industry, many of the stated objectives have so far been at a very high level.

The more recent plans (like the NSW Strategy (October 2021), NT Plan (October 2021) and WA Strategy (updated in January 2021)) all include specific targets, whereas other states and territories take a more conceptual approach.

To 2025: Foundations and Demonstrations

Separately, the First Low Emissions Technology Statement 2020 set the target of generating clean hydrogen at under $2 per kg.

No specific targets, however sets a vision that by 2030, Queensland will be at the forefront of renewable hydrogen production in Australia, supplying an established domestic market and export partners with a safe, sustainable and reliable supply of hydrogen.

Rather, monitoring the following set of KPIs:

Establishes goals for the development of the hydrogen industry until 2030.

The ACT Paper is a discussion paper on the ACT's sustainable energy policy generally, not a hydrogen policy specifically.

Currently, one of the most hotly contested issues in the hydrogen space is whether governments should pursue 'green' hydrogen only (hydrogen made with renewable power, without fossil fuels) or also 'blue' hydrogen (hydrogen made with fossil fuels, but with emissions captured and stored, or offset). Some governments, like NSW, have expressed a commitment to green hydrogen only, citing consumer interests in totally clean energy and comparable price points. Other governments target 'renewable' hydrogen, with some explicitly including blue hydrogen in that category and others staying silent on whether renewable hydrogen covers blue hydrogen:

The different preferences expressed by federal, state and territory governments may guide investors and developers as to the types of projects likely to receive greater support in each jurisdiction. However, a preference for one type of hydrogen production over another does not necessarily preclude projects utilising an alternative fuel source from proceeding.

Since the National Strategy was released, the Australian Government has made producing clean hydrogen for under $2 per kilogram ('H₂ under 2') a priority stretch goal under its first Low Emissions Technology Statement, as part of the broader Technology Investment Roadmap.2 A price point of less than $2 per kilogram is understood to be the point where hydrogen becomes competitive with alternative energy sources in large-scale deployment across our energy system.

While a number of state and territory strategies refer to the 'H2 under 2' target, only the NSW Strategy sets a specific price target. The NSW target is AU$2.80 per kilogram by 2030, with 'further cost reductions [to be] achieved through technology innovations and the falling cost of renewable energy to put us within reach of $2 per kilogram by the end of the decade'.3

All state and territory hydrogen strategies (except for the ACT), and the National Strategy, contemplate hydrogen production for both domestic use and export to Asian markets – namely Japan, South Korea and China.

The National Strategy addresses both domestic consumption and export, however its 2030 measures of success have a strong focus on export. These include goals for Australia to be among the top three exporters of hydrogen to Asian markets, major offtake or supply chain agreements to be in place with importing countries, and to implement a robust, internationally-accepted certification scheme. The National Strategy also aims to have hydrogen production and use integrated into energy market structures in Australia.

The specific targets set out in the NSW Strategy focus on domestic consumption, particularly transport uses (eg the number of hydrogen-fuelled vehicles in the NSW government fleet and hydrogen refuelling stations by 2030) and gas network blending (eg 10% blending into gas networks by 2030). However, it also recognises the opportunity to export hydrogen produced in NSW, particularly to Japan and South Korea. One of the key principles is that an active domestic market for hydrogen will enhance NSW's export capacity.

The Victorian Strategy promotes hydrogen for both domestic use and export. In particular, it identifies the opportunity for hydrogen production using Victoria's offshore wind resources and subsequent export. The world's first hydrogen cargo was shipped from Port Hastings in Victoria in January 2022.

The WA Strategy promotes hydrogen for both domestic use and export. 2022 targets focus on domestic uses (including blending of hydrogen in the gas network and developing a hydrogen vehicle refuelling facility). The longer-term 2030 targets maintain this focus but also aim for WA's hydrogen export market share to be similar to its current LNG’s export market position.

The QLD Strategy recognises opportunities for hydrogen use both domestically and for export, however the focus tends towards export. The QLD Strategy aims to set Queensland up as the 'hydrogen exporter of choice for the world'.

The South Australian Plan addresses both domestic use and export, with a particular focus on export to South Korea, China and Japan.

The NT Plan addresses both domestic use and export. It targets the implementation of microgrid hydrogen and solar pilot projects for remote communities within two years after the strategy's publication (ie by 2023), while also aiming for renewable hydrogen exports from the Territory to account for 15% of Australia's renewable export market by 2050.

The TAS Action Plan addresses both domestic use and export, with its shorter-term goals to 2024 focusing on local use, and longer-term targets aiming for the export of renewable hydrogen from 2025 – 2027. From 2030 onwards, the TAS Action Plan wants locally produced hydrogen to be a significant form of state energy and for Tasmania to be a global producer and exporter of renewable hydrogen.

Whilst all strategies acknowledge the need for an appropriate regulatory framework, only SA, NSW and WA have implemented specific legislative reforms to facilitate the development of a hydrogen industry.

The Petroleum and Geothermal Energy (Energy Resources) Amendment Bill 2021 (SA) was tabled before the House of Assembly on 25 August 2021. It has not yet been passed.

On 19 November 2021, the Energy Legislation Amendment Bill was passed by Parliament. The Bill amends the Electricity Supply Act 1995, Energy and Utilities Administration Act 1987, Forestry Act 2012, Gas Supply Act 1996 and Pipelines Act 1967 to facilitate the development of a hydrogen industry.4 It includes amendments to:

The NSW Strategy contemplates additional reforms yet to be introduced, including:

On 18 November 2021, the WA Government announced a new proposed form of land tenure – the ‘Diversification Lease’ – under the Land Administration Act 1997 (WA). The purpose of this new form of non-exclusive land tenure is to facilitate the development of hydrogen and renewable projects on pastoral lease areas and vacant Crown land.5 However, there is insufficient detail to determine the government's position on the development of these projects on mining tenements, where these projects would be unrelated to mining. Further information is available here.

NSW, VIC, QLD, SA and TAS all have plans to develop REZs to facilitate the connection of renewable energy sources to electricity networks by co-locating essential infrastructure, logistics and resources. Of these, strategies in NSW, VIC, QLD and TAS specifically link REZ development with hydrogen production.

The Northern Territory is already working to transform its pre-existing Middle Arm Sustainable Development Precinct into a large-scale hydrogen export location (with expressions of interest to be sought from developers in 2022). Further, Western Australia plans to develop the Oakajee Strategic Industrial Area and has sought expressions of interest to develop renewable hydrogen projects within that area.6

The public financial incentives available to proponents of hydrogen projects will influence the attractiveness of one jurisdiction over another for investment. Most of the various strategies and plans released by the states and territories provide high-level commitments to the types of financial support available to hydrogen industry participants. The incentives come in various forms, including grant rounds, loans, direct funding, matched funding commitments, in-kind support, and relief from various network and regulatory charges:

The release of hydrogen strategies and policies by every state and territory evidences the strong commitment of governments to seeing hydrogen play a major role in Australia's energy and export future. However, these strategies vary significantly, creating challenges for investors and industry participants attempting to stay on top of changes and make sense of the key differences. To be prepared for the hydrogen transition:

Ambition for a global hydrogen economy

With the lack of viable alternatives to achieve the levels of deep decarbonisation consistent with net zero targets - clean hydrogen has unprecedented political and industry momentum.

There is now a clear sense that hydrogen may prove the 'missing link' for countries seeking to achieve a fully functioning, net-zero economy consistent with their Paris Agreement objectives. We look at a detailed analysis of the hydrogen vision. 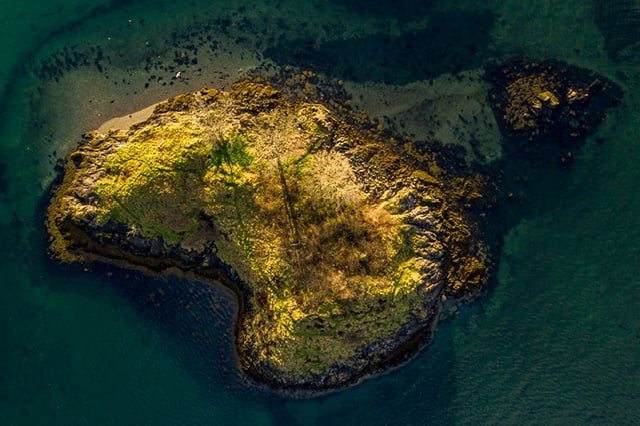